Home | About Us | NZAB | Life Members

In recognition and appreciation of their outstanding service provided to the baking industry the following people have been presented with NZAB Life Membership Awards. 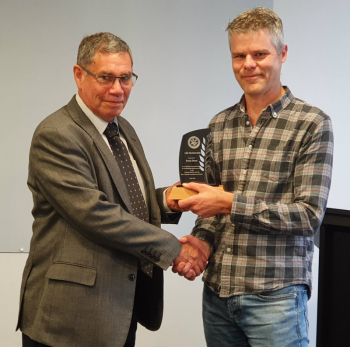 Peter started his baking career at Tokora Bakeries in the early 70s where he worked part time for the Halsey family while also working as an employee for the local newspaper. Eventually he moved to the bakery full time running the new MDD bread plant and then moving on to production management.

In the late 70s a group of Quality Bakers Independent owners set up a new bakery in Auckland called “Freshbake”. Kents Bakery in Newmarket was initially purchased to give the group a foothold in the area while a new plant was being built in East Tamaki. Freshbake Auckland was later purchased by the Goodman Group and became Hot Plate Products some years later. Peter was appointed Production Manager of Freshbake Auckland and spent many challenging years on the plant. During this time Peter gained a vast range of skills within the baking industry which stood him in good stead for future projects.

Peter then moved to the Manawatu and worked for Fermentation Industries who had set up a yeast plant in Palmerston North. Peter was employed as the Technical Sales Manager and travelled extensively throughout the country assisting bakeries in all aspects of the bread baking industry.

After sometime away from the baking industry as General Manager for Whitlocks Sauce in Wanganui, Peter accepted a General Manager’s position at Breadcraft in the mid 80s.

During the 90’s Peter devoted significant time at Breadcraft building a flatbread operation launching Pita, Tortilla, Panini, Lebanese and various other products which doubled its Masterton based tally. This new development work was strongly supported by bakery owners Bob and John Cockburn and their input and support played a major role in the growth and success of the company.

In 2003 Peter and John Cockburn purchased Breadcraft and invested in its Artisan baking plant which doubled the footprint of the operation and allowed them to export artisan and flatbreads to Australia and the Pacific Islands.

During his busy career, Peter was also a member of Baking Industry Research Trust (BIRT) and later a Board Member and then President of the NZ Association of Bakers (NZAB)  where he spent as much time as he could supporting the industry and working through its challenges with other industry personnel