New Zealand bakers use conventional bakery equipment and materials to make variety breads. Starting from a basic, white bread formula we can obtain a huge variety of bread types just by changing or adding some ingredients. For example, bread lightly sprinkled with sesame seeds makes the bread look distinctively different without requiring any major changes in processing. 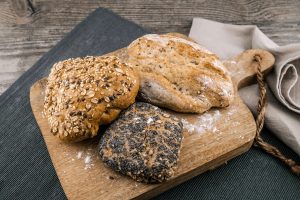 Ingredients often include rye, soya, malt, honey, nuts, fruits, seeds, cheese and herbs. Use of some ingredients means that the bread making process has to be altered. For example, dried fruit or soaked grains added to the dough requires decreasing the amount of water added to recipe.

In bakeries, variety breads are likely to be more labour intensive, have a lower production rate and higher ingredient costs. The greater variety of ingredients take more space and require more specialised production. Equipment needs to be adaptable enough to handle the variety doughs but specialised equipment may be required to make some product types, especially the traditional ethnic breads.

A lot of the individuality of variety breads comes from their distinctive moulded shapes, size and patterns on the loaves. Markings on the top of the loaf can be decorative and individual. Sometimes the patterns on the loaves have a special function. For example the cuts on the top of bread allow the steam to escape and prevent the loaf from cracking or breaking apart. There are many shapes such as the cob (round ), coburg (like a cob but with a cross cut on the top) and plait. Loaves can be large or small, high or flat.

Until dry yeast was invented in the nineteenth century sourdoughs were the only leavenings (raising agents) used in yeast bread. Bread made by the sourdough method makes a hearty, acid bread with thick crusts that will last up to a week.

Sourdough bread can be made from either a bought sourdough mix, a “starter” or by keeping aside dough from a previous loaf. No yeast, or only a little, is needed to make the bread rise. A starter which is sometimes called levain, can be made in about five days. Wild yeasts are always found in the air we breathe. When flour and water are mixed together and left in a room, the wild yeasts land in the mix, feed on the sugars in the flour and multiply. They release alcohol and carbon dioxide and cause the mixture to ferment.

After only one day the mixture will start to smell sour and will expand. It can be used after four days. A little dried yeast can be added when the flour and water is first mixed. The starter can be used within a day and is less sour. In past centuries baking was a weekly event. A little piece of dough was kept aside and not baked. A few days later the piece was mixed with more flour and water so the yeast in the dough could start to grow again. This process was repeated until it was used for making the next lot of bread.

Potato bread (rewena paraoa) was first baked in New Zealand in the mid 19th century. The starter is potato cooking water! San Francisco sourdough is a delicious sourdough famous throughout the United States, and has its own distinctive “area specific” sour flavour.

Some well known hearth breads include French sticks (baguettes) and Vienna bread which were traditionally baked directly on the hearth, that is, the brick floor of the oven. 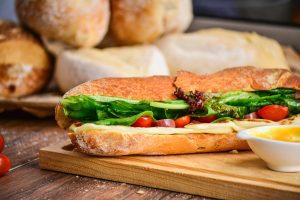 Some bakeries overseas place brick or stone floors in their ovens so they can make this a selling point. The oven for hearth breads requires steam to make the bread crusty. Special pans and baskets are now used to give loaf varieties a different shape and distinctive appearance. In some European countries, the bread ingredients are legally controlled and traditional hearth breads are permitted to contain only wheat flour, water, yeast and salt. Bread with only these ingredients and without fats or emulsifiers will not keep for long.

Traditional varieties are bought daily in Europe and do not need emulsifiers because they are bought just for that day’s meal time. Many European hearth breads have cuts made on top before baking. The cuts are made to the right depth with a razor sharp knife. These cuts in the crust minimize side bursting and give breads an attractive appearance. The defining characteristics of French sticks are its shape and light, open cell structure. The crust should be crisp and have five or seven well angled cuts in the top surface.

In France, French bread is only allowed to contain flour, water, yeast and salt. Vienna bread was traditionally made with the strong high protein flour from central Europe and baked in an oven filled with steam to produce a thin glazed crust. These loaves should have a glossy, crisp crust and open crumb structure. Cuts are made parallel.