Bagels are round, chewy rolls about 10 cm in diameter with a hole in the middle.

They are in fact much like a doughnut in appearance, but the resemblance ends there (or it should!). The taste and texture of the bagel is very different to the doughnut although they have been referred to as ‘cement doughnuts’ or doughnuts with rigor mortis! 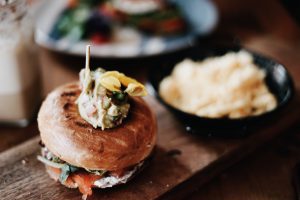 The first commercial bagel is said to have been created by an unknown Viennese baker who wanted to honour Polish King John III Sobieski who repulsed the Tusk invasion, thereby saving Vienna. As a symbol of King John’s skill as a horseman, the baker formed yeast dough into a ring, supposedly resembling a stirrup. The Austrian word for ‘stirrup’ is beugel.
It also was traditional in Poland to give a bagel to a woman in childbirth. However, bagels are said to have been around long before the 17th century. A bagel was reputed to be found in a Uygar (pronounced wee-ghur) tomb around 100 AD. The Uygar people come from north-west China and have a bread that resembles a bagel in shape and taste.

Bagels have been considered a Jewish ethnic food until recently. However, they are very popular in the United States where bagel consumption is said to equal one bagel per week per person. On the east coast of the United States it is usually used as a breakfast bread but can also be used as a sandwich bread.

Here in New Zealand bagels are becoming more well-known and popular and are often used as a sandwich bread here. Bagels can be eaten fresh or toasted before topping.

Bagels aren’t made in the same way as bread. Before baking the bagels are boiled or poached. Boiling gelatinises the starch on the surface of the dough giving a glossy exterior with distinguishes them from regular bread rolls. The boiling process also sets the outside structure of the roll so the bagel retains its shape during the baking process. 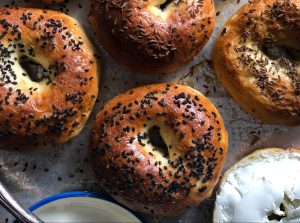 Bagels have a close, tight, chewy interior. Some bagels aren’t boiled first but are baked with heavy steam or are egg washed to give the glossy exterior. These products are baked in this way to save time and labour costs, but are better described as crusty rolls rather than bagels.