Flatbreads were the earliest breads made by humans. The most basic are still a mixture of flour, water and salt kneaded into a pliable dough before being shaped by hand and baked. Wheat is the most popular choice of grain although barley, millet, corn, oats, rice and rye are used to make various flatbreads. 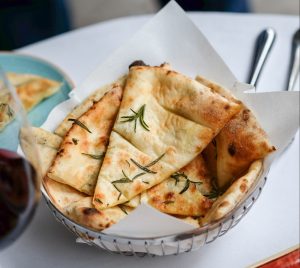 Flatbreads are known to have been baked in settlements from the Euphrates Valley in Iraq where a baker’s oven from 4000 BC was excavated on the site of Babylon, all the way down to Egypt where they are recorded on tomb inscriptions dating from 3000 BC. Interestingly in South America the Mayan people had developed corn tortillas while Neolithic people are thought to have discovered the secret of flour after cooking a mixture of grain and water that made a kind of porridge. The next discovery was that pounding the grain released flour to make a drier mix which could be cooked on flat stones by a fire. Because these flatbreads baked quickly, nomadic herdsmen were able to bake them on flat stones in the hot sun while tending flocks of sheep or goats.

This discovery of flour was the beginning of agriculture. Flatbreads became a staple source of food. The area between Babylon and Egypt was well suited to wheat growing and prospered. Flatbreads were eaten at every meal, functioning as plates with other foods being served on them or as implements for eating other things such as stews or sauces. They are still very important amongst the people of India and the Middle East, and have spread to Western countries where their popularity is growing because they are so versatile. They can wrap (tortilla), hold (pita) and form the base of substantial foods (pizza).

Flatbreads can be single or double layered:

Single layered flatbreads can be made without yeast from a firm dough, e.g. tortillas from Mexico, or from runny mixtures poured onto a hotplate as with American pancakes and French crepes. Alternatively they can be leavened (risen by a process of yeast fermentation), as with the baladi from Egypt.

Double layered flatbreads are leavened (with fresh yeast or a sourdough remnant of a former mix) and risen twice before baking. Baking at a very high oven temperature seals steam inside the bread, causing it to blow up like a football during the baking. This forms a pocket that can later be filled with other food. Egyptian pita bread is a good example of this pocket bread. 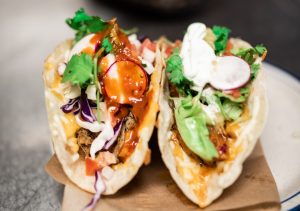 By the end of the Stone Age (1600 BC), Egypt had exported the leavening process around the Mediterranean. It spread with flatbreads along the trade routes and wherever Mediterranean conquerors went. Now flatbreads like chapati are baked throughout India, Tibet, Mongolia and into China; lavash in Iran and Turkey; bannock in Scotland; and rye crisp in Scandinavia. In New Zealand Maori cooked flatbreads from hinau berry kernels, from raupo pollen and from the cabbage tree interior. From the 1850s they grew wheat from grains brought out by early European settlers. It was much easier to process into bread than the indigenous raw materials and Maori developed it into a fried bread, parao parai.

Bread sustains life and consequently flatbreads have important religious connections for people around the world. Flatbread was offered to gods and buried with bodies to ensure food for the afterlife. It was baked for seasonal festivals. Matzo is the unleavened bread that religious Jews bake to celebrate the Feast of Passover. Jesus Christ referred to himself as the bread of life. His crucifixion was remembered by a cross cut into the sourdough flatbreads made in Europe in the Middle Ages and Greeks still bake a flat sesame lagana during the Lenten fast leading up to Easter, which celebrates Christ’s return from death.

Flat breads are made throughout most of the world. Examples are pita (from the Middle East), chapati and naan (India), tortilla (Mexico) and focaccia (Italy). The bread may be leavened (have a raising agent of yeast or sourdough) or unleavened.There are two ways of shaping flat breads; the dough can be sheeted (rolled thinly) and cut to shape, or the bulk dough can be divided into pieces, rounded and then sheeted.

Pita bread is made with a mixture of flour, salt, yeast and water. Fermentation time is short so the dough does not rise. When baked, heat quickly seals the top and bottom surfaces and the rapid expansion of gases between them tends to blow the crusts apart forming the pocket.
Naan is also a leavened bread. It is baked by placing flattened pieces of dough onto the walls of an urn shaped oven. These breads are usually baked in an extremely hot oven with temperatures of 450°C – 600°C.

Chapati is an unleavened round flat bread from Northern India. Chapatis are enjoyed with most meals, wrapped around meat or vegetables.

Tortillas are an unleavened flatbread from Mexico. They are made from cornflour or wheat flour. They can be soft or crisp, depending on how long they are baked. When they are soft they are used as burritos and when crisp are served as tostadas or corn chips.