Bread is the product of baking a mixture of flour, water, salt, yeast and other ingredients. The basic process involves mixing of ingredients until the flour is converted into a stiff paste or dough, followed by baking the dough into a loaf.

The aims of the bread making processes used in New Zealand (mechanical dough development, bulk fermentation and no-time dough) are to produce dough that will rise easily and have properties required to make good bread for the consumer.

To make good bread, dough made by any process must be extensible enough for it to relax and to expand while it is rising. A good dough is extensible if it will stretch out when pulled. It also must be elastic, that is, have the strength to hold the gases produced while rising, and stable enough to hold its shape and cell structure.

Two proteins present in flour (gliadin and glutenin) form gluten when mixed with water. It is gluten that gives dough these special properties. Gluten is essential for bread making and influences the mixing, kneading and baking properties of dough. When you first start to bake bread, learning to mix the ingredients is very important.

Each dough has an optimum mixing time depending on the flour and mixing method used. 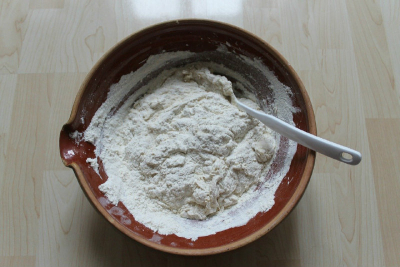 It is a balancing act as
too much mixing produces a dough that is very extensible with reduced elastic properties
while undermixing may cause small unmixed patches which will remain unrisen in the bread giving a final loaf with a poor appearance inside.

Once the bread is mixed it is then left to rise (ferment).

The yeast cells grow, the gluten protein pieces stick together to form networks, and alcohol and carbon dioxide are formed from the breakdown of carbohydrates (starch, sugars) that are found naturally in the flour.

Yeast uses sugars by breaking them down into carbon dioxide and water. The yeast needs lots of oxygen in order to complete this type of fermentation.

The carbon dioxide produced in these reactions causes the dough to rise (ferment or prove), and the alcohol produced mostly evaporates from the dough during the baking process.

During fermentation, each yeast cell forms a centre around which carbon dioxide bubbles form. Thousands of tiny bubbles, each surrounded by a thin film of gluten form cells inside the dough piece. The increase in dough size occurs as these cells fill with gas. 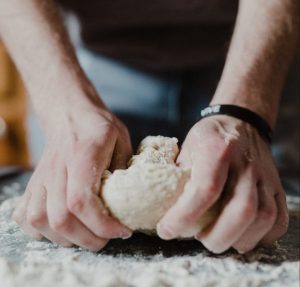 Kneading involves stretching and folding the dough in a rhythmical manner that develops the gluten in the flour and releases excess gas. Any large gas holes that may have formed during rising are released by kneading and so a more even distribution of both gas bubbles and temperature also results. The dough is then allowed to rise again and then kneaded again dependent on the end product requirements.

During the final rising (proving) the dough again fills with more bubbles of gas, and once this has proceeded far enough the doughs are transferred to the oven for baking. 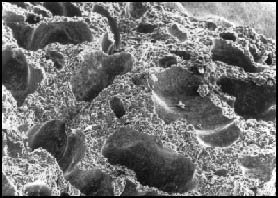 General appearance – large gas holes lined with gluten with smaller holes and ingredients in between these. (Electron microscope view) 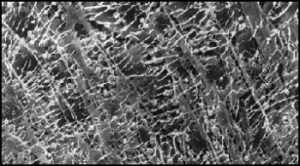 As the intense oven heat penetrates the dough the gases inside the dough expand, rapidly increasing the size of the dough. This is called “ovenspring” and is caused by a series of reactions: Gas + heat = increased volume or increased pressure. Gas pressure inside the thousands of tiny gas cells increases with the heat and the cells become bigger. 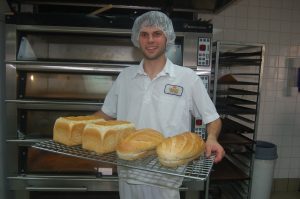 A considerable proportion of the carbon dioxide produced by the yeast is present in solution in the dough. As the dough temperature rises to about 40°C, carbon dioxide held in solution turns into a gas, and moves into existing gas cells. This expands these cells and overall the solubility of the gases is reduced.

The oven heat changes liquids into gases by the process of evaporation and thus the alcohol produced evaporates.

From about 60°C,  stabilisation of the crumb begins. Starch granules swell at about 60°C, and in the presence of water released from the gluten, the outer wall of the starch granule cell bursts and the starch inside forms a thick gel-like paste, that helps form the structure of the dough.

From 74°C upwards the gluten strands surrounding the individual gas cells are transformed into the semi-rigid structure commonly associated with bread crumb strength.

The natural enzymes present in the dough die at different temperatures during baking. One important enzyme, alpha-amylase, the enzyme which breaks starch into sugars, keeps on performing its job until the dough reaches about 75°C.

During baking the yeast dies at 46°C, and so does not use the extra sugars produced between 46-75°C for food. These sugars are then available to sweeten the breadcrumb and produce the attractive brown crust colour.

As baking continues, the internal loaf temperature increases to reach approximately 98°C. The loaf is not completely baked until this internal temperature is reached. Weight is lost by evaporation of moisture and alcohol from the crust and interior of the loaf. Steam is produced because the loaf surface reaches 100°C+. As the moisture is driven off, the crust heats up and eventually reaches the same temperature as the oven.

Sugars and other products, some formed by breakdown of some of the proteins present, blend to form the attractive colour of the crust. These are known as “browning” reactions, and occur at a very fast rate above 160°C. They are the principal causes of the crust colour formation.

In bakeries bread is cooled quickly when it leaves the oven. The crust temperature is over 200°C and the internal temperature of the crumb about 98°C. The loaf is full of saturated steam which also must be given time to evaporate.

The whole loaf is cooled to about 35°C before slicing and wrapping can occur without damaging the loaf. 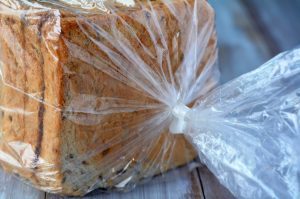 A moist substance like bread loses heat through evaporation of water from its surface. The rate of evaporation is affected by air temperature and the movement of cool air around the loaf.

In a bakery there are special cooling areas to ensure efficient cooling takes place before the bread is sliced and wrapped.

Welcoming baking industry professionals from every segment and in every role, IBIE delivers a world…
News