What happens without gluten in bread?

Home | Nutrition | Gluten | What happens without gluten in bread?

The gluten proteins are very important in bread making and are given special consideration by the miller and baker. It is realised that without gluten, light, porous wheat bread, as we are accustomed to, would be impossible.

The gluten of a loaf is the structure or frame work that holds the loaf together and retains the gas in the dough. It is the elastic nature of gluten which allows dough to rise and to expand in the oven. 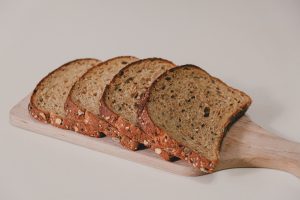 When water is mixed with flour the gluten is formed as a rather homogeneous mass, and it is during the mixing process and rising of the dough that the fibres and sheets of gluten which form the supporting tissue of the loaf are developed.

Flours without gluten do not provide the same elastic matrix for the structure and textures we associate with bread and baked goods.

So gluten free bread can be described as more dense and lacking in the open light texture that we associate with wheat bread. In addition to this Gluten free bread has a crumbly texture which stales quickly. Gluten free breads are available on the market made from grains, such as, rice or corn. Improvements are constantly being made to the texture of these breads as new ingredients and manufacturing techniques are developed, although product development of these products is difficult because without gluten, there is no framework to trap gases given off by raising agents.