What is gluten intolerance?

Gluten intolerance can be diagnosed at any age and can be called a variety of names:

For the purpose of this website we will refer to Gluten intolerance as Coeliac Disease.

Coeliac disease is a condition that causes damage to the bowel wall as gluten is unable to be digested normally. The adverse reaction that people with Coeliac Disease experience when they consume gluten is due to Gliadin. This protein is a component of gluten, which is naturally found in a range of wheat and cereals (including rye and barley). 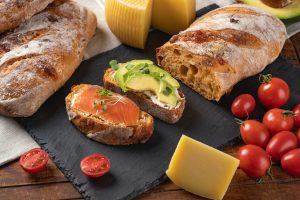 Gliadin damages the lining of the intestine of people with coeliac disease, which results in damage to the villi (finger-like projections important in the small intestine for digesting and absorbing nutrients) and inflammation of the tissues. The effects of this damage occur a few hours after eating the gluten containing food. Due to damage to the small intestine, the absorption of almost all nutrients appears to be affected in some way.

When gluten is removed from the diet of a person suffering from Coeliac Disease, the small intestine recovers and the symptoms disappear. However a gluten free diet must be maintained through out a person’s life time and all gluten must be excluded, which means the exclusion of a range of grains.