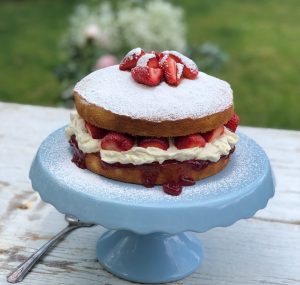 Also known as the’whipping’ method and is usually used for sponges, egg whites for meringue, pavlova cakes, and for chiffon products.

When making sponge cakes, most of the sugar is added to the eggs before beginning whipping. During egg whipping, air cells are formed and incorporated into the mix. In pure sponges these cells affect the entire leavening or raising process because no baking powder is used. Eggs and sugar should be warmed to 38°C before whipping to soften the egg yolk and allow quicker whipping and greater volume. Egg yolk contains lecithin which surrounds the bubbles in the foam.

This allows a greater number of cells to form and the cells contain a larger amount of air. It has been found that an addition of 20% egg yolks to the whole eggs will improve the foam formation during whipping. For some types of sponge cakes it is advisable to whip the yolks and part of the sugar first, then the egg whites and remaining sugar are whipped and the two whipped products combined. This has the advantage of producing maximum aeration of the foam formed in the whipping of the eggs.

For whipped sponge cakes, flour should be sifted and folded in gently in stages to ensure that aeration is maintained. Loss of aeration results in a smaller product with a coarse texture.

For pavlova, best results from whipping occur when the egg whites are 15°C. Egg whites should be whipped slightly to a foam and the sugar added in a steady stream. It is best to whip at high speed until the eggs are almost completely whipped and then slow it down for maximum aeration, and production of finer, more even air bubbles.

Aeration is only successful if the air remains in the batter until it is baked. For large mixes this is aided by modern stabilisers and emulsifiers (or fats) which are added during the whipping stage. These help produce a stiff foam with small bubbles.