Yeast belongs to the fungi family. It is a very small single cell micro-organism. 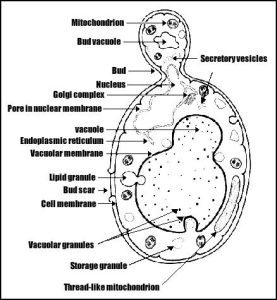 Like all other fungi it doesn’t have the power to produce food by photosynthesis. Instead it ferments carbohydrates (sugars) to produce carbon dioxide and alcohol which gives bread it’s texture, colour and aroma.

There are several types of yeasts but the important ones for the baking industry are those belonging to the genus Saccharomyces cerevisiae, which means “sugar eating yeast”.

Yeast has been used by man to make bread and alcohol for thousands of years. Evidence of this has been found in ancient Babylonian wall carvings and Egyptian hieroglyphics dating back to 2000 B.C.

The leavening of bread was considered an art form because the ancient peoples didn’t understand the process of fermentation. They probably stumbled across leavened bread when a piece of old over-fermented dough full of yeast cells was mixed in with fresh dough and the resulting bread was more palatable than the unleavened bread they had been used to.

In 1676 Anton van Leeuwenhoek, when looking through a microscope, identified that yeast was a cell and that different types of yeast cells could be used for brewing beer or making wine.

In the early days of bread production a piece of dough from yesterday’s bake was kept and added to the new day’s dough because it was found that the resulting dough was more consistent and fermented faster. The old piece of dough is called the starter or “leaven”.

In the 1800’s an understanding of the leavening process was fully developed through the work of Louis Pasteur. He discovered that yeast was the organism that caused fermentation.