Starch in Breadmaking and Baking 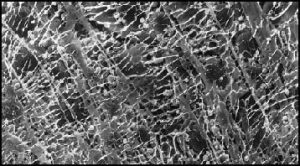 This scanning electron microscopic view of dough rising shows gluten strands forming two ways, diagonally down and across the photograph. Starch and yeast granules can be seen randomly amongst the gluten. The smallest granules are yeast.

When starch is heated with water, granules absorb the water, and swell. Eventually they burst and the inner part of the granule spills out to form a thick gel. This is what occurs when you make a gravy or sauce. This process is called gelatinisation. In bread making not as much water is added as when making a sauce or gravy, and gelatinisation isn’t completed – the starch granules swell, and many don’t burst to form a gel. This forms a network of bloated starch granules all touching at the edges.

Starch also interacts with gluten during baking. The gluten breaks down and gives up water which is quickly taken up by the starch. This makes the gluten set and become rigid, which is why our loaves of bread don’t collapse when they come out of the oven.

Starch also provides “food” for the yeast to feed on during fermentation. As explained, alpha- and beta-amylase work together to build starch into sugar. It is this sugar that feeds the yeast in fermentation. The yeast produces carbon dioxide which helps the bread dough rise and gives bread its finished texture.

Starch, gluten and the gas from yeast fermentation all work together to produce what we know as bread, with it’s crumb and gas bubble texture.

Cakes need starch for its water holding characteristics. For certain cakes, cake flour treated with chlorine is used. The chlorine alters the starch’s properties and the baker can include more sugar and fat (like butter) in the recipe. A soft, low protein wheat flour is usually preferred as less starch damage occurs, which gives better volume and a softer crumb.

Biscuits are high in sugar and fat and low in moisture (water). These factors inhibit starch gelatinisation which therefore does little to contribute to the structure of a finished biscuit.

To freshen slightly stale bread simply reheat it for a short time in the oven. The starch granules reabsorb water, swell again and produce a “fresh” loaf. If the bread is very stale you could try pouring milk over it first.