Yeasted pastries are a cross between puff pastry and bread so a combination of techniques used for both bread and pastry making are involved in their production. To make high quality yeasted pastries it is important to understand the effects of ingredients on the quality of the final products. Information about the functions of ingredients can be found in the bread and puff pastry information sheets.
First, a dough is made with yeast in the same way as bread dough is prepared. This contains flour suitable for breadmaking, some sugar, dough fat, salt, yeast and cold liquid, which is usually water or milk. Some recipes include eggs, giving the baked pastry a beautiful golden colour. The flour needs to have a fairly high protein content. When the ingredients are mixed into a dough the protein changes to gluten. The gluten is strong and elastic, producing layers that hold up the pastry after it is baked. After the dough has been kneaded it is covered and left in a cool place to relax. This helps prevent distortion and shrinking in the final product. After relaxing, the dough must cool for the lamination stage.

Lamination is a way of adding the ‘roll-in’ fat to the dough to produce a paste (unbaked pastry). This paste is made up of many very thin layers of dough and fat, which are made by rolling and re-rolling the dough in a similar way to making puff paste. The tastiest fat is butter and it leaves no aftertaste. The butter must be cool, but pliable. If it is too soft it soaks into the dough and layers will not form. One way to add the roll in fat is to use the English method.

The dough is then given four half turns. This is done by placing the paste on the bench so that the unfolded sides of the dough are parallel to the edge of the bench. The paste is then carefully rolled away from the edge of the bench into another rectangle and then folded into three, as in figure 2b. It is then covered and placed in a fridge for 10-15 minutes. Repeat this twice more. Finally the dough is rolled out ready for cutting. 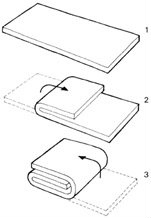 Adding the roll in fat 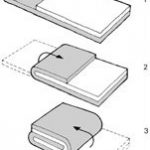 are made by rolling out the paste into a square about 3.5mm thick. This is cut into triangles that are rolled up, bent into the traditional crescent, put on a baking sheet and left to rise until they have doubled in size. This takes about 40 minutes at 32°C. Before being baked, croissants are brushed with a beaten egg so the baked croissant looks golden. During baking the dough rises a little more, as bread does during breadmaking. This is called ovenspring. The moisture in the dough puffs up the pastry when it converts to steam. The steam is trapped between the layers of fat, turning the fat and dough laminations into flaky layers so the croissant looks like a cross between bread and puff pastry.

Danish pastry make-up
To make Danish pastries the paste is rolled out to about 4mm thick, cut and folded into various shapes – from ‘snails’ and ‘elephant ears’ to ‘swirls’ and ‘knots’. All sorts of fillings can be added; popular ones include almond paste, fruit, nuts or custard. Like croissants, danish pastries are then put on a baking tray and left to rise until about double in size. Toppings such as chopped nuts may be added and a beaten egg may be brushed on the surface just before baking. Danish pastries rise up and form flaky layers like croissants. After baking, the pastries are usually glazed to make them look attractive and to add flavour. Usually the glaze is diluted apricot jam, which is brushed on while the pastry is still hot. When cool the pastries may also be iced. Lemon icing is a delicious and popular icing.