The word ‘biscuit’ means different things to different people. In America, the word describes a chemically leavened (baking powder) bread-type product, the nearest equivalent in New Zealand being a scone. Products known as biscuits here, and in the United Kingdom, are called ‘cookies and crackers’ in the USA.

Naming Biscuits around the Globe

In France, Switzerland and Italy, a great quantity of simple, plain biscuits are made by large manufacturers. Many varieties are also made by bakers. Biscuits which require more work and a degree of decoration are referred to as ‘Petit Fours Secs’. Others include ‘Tea Fancies’, which if made small would be referred to in France as ‘Les Petits Gateaux Sec’ or in the UK as ‘Fancy Biscuits’. 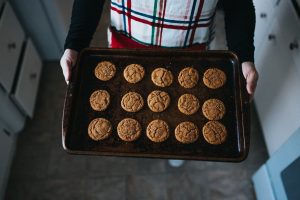 Current Western nutritional fashion criticises the consumption of biscuits because of their high calorie content. Many travellers and explorers over the centuries have been grateful to the biscuit for this property. Biscuits also form a significant component of many emergency food supplies.

Biscuits and biscuit-like products have been made and eaten by man for many hundreds if not thousands of years. The word ‘biscuit’ is is derived from the Latin ‘bis coctus’ or the Old French ‘bescoit’ (Concise Oxford Dictionary, 1988), meaning twice cooked. Up until the 18th Century, biscuits were always first baked in a hot oven and were then transferred to a cooler oven to complete the drying out process. Today pretzels are baked this way.

Now, any small baked confection could be termed a biscuit and even goods like macaroons are referred to as macaroon biscuits. Names such as “cookie” have become popular during the past ten years. Although “cookie” is derived from the Dutch ‘Koekje’ meaning biscuit and the Oxford dictionary refers to “cookie” as a plain bun, or a small sweet biscuit. “Cookie” has become the popular descriptive name for anything from an average size biscuit sold in packets of ten or more, to the very large round biscuit available as a single piece.

Another type of biscuit is a cracker. It is a thin, dry biscuit, probably named because of the familiar cracking noise it makes when eaten.