First a dough is made using a little dough fat and then more fat is added between the dough layers. The dough and fat are then laminated, which involves folding and rolling the dough and fat a few times to make many layers of dough and fat. The fat stays as separate layers and does not mix into the dough.

There are three different ways of adding the fat.

The quickest way is the Scotch or Blitz method. It is suitable for making pastry for pies, sausage rolls and pasties. Flour, salt, cold water and dough fat are mixed together in a mixing bowl. Walnut-sized lumps of fat are then added to the bowl and are mixed in a little, to ensure large lumps of fat are left whole in the dough. The fat is distributed throughout the dough in flat discs, rather than a continuous sheet as with the other methods. As a result this pastry does not always rise evenly and so is not suitable for products that must look exceptionally good.

In the English method the flour, salt, water and dough fat are mixed together. This dough is rolled into a long rectangular shape, three times as long as wide. Two-thirds of the dough is covered by dabs of butter. The third without butter is folded into the middle first then the other end is folded on top.

The French method – The main feature of the French method is that a square layer of fat is wrapped in the basic dough. This dough is made by rubbing about 10% of the soft fat into the flour, then adding cold water and mixing well to make a clear dough. After testing it is rolled into a square, making each side half the distance between opposite corners of the dough. The fat is placed in the centre of the doughs in the diagram below and the corners folded into the centre so they meet and cover the join. The paste is then folded again.

Once the fat is placed on the dough during lamination, the layers are folded and rolled a number of times until you have the number of layers you want. This can range from 100 to about 700. If there are more than 700 layers the dough layers are too thin and break during baking, so the pastry does not rise evenly.

Dough is rolled into a rectangle three times as long as wide to a thickness of about 12 mm. When rolling the paste keep the unfolded edges closest to you and parallel to the rolling pin before you begin rolling. The dough is then folded as described below.

There are two different ways of doing this and any combination of the two ways can be used when making puff pastry:

The half-turn method
The book-fold method 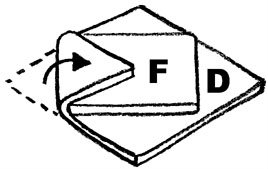 When there are enough layers the paste is rolled out to a final thickness of about 5 mm thick and left to rest so it will not shrink or become misshapen when baked. The paste is then used to cover tins or is cut into the shape needed. To line baking tins roll the paste carefully around a rolling pin and unroll it over the tin. Then trim off excess paste that is overhanging by cutting around the top of a tin with a knife. Finally, add fillings or toppings. Puff pastry is best baked at 220°C.

Unbaked puff pastry (paste) has many alternating layers of fat and dough to make it puff. As the pastry bakes water boils off as steam from the gluten in the dough layers and goes into the fat layers. As water turns into steam it expands, making large bubbles between the layers of dough. This inflates the pastry and it becomes about eight times higher.